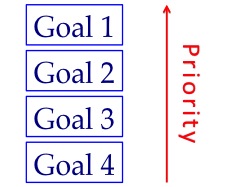 Most organizations have goals. Multiple goals. Too often what’s not clear is the relative priority among the goals. And which goal ultimately takes precedence. Worse, I often hear leaders say that every goal is a top priority.

I’ve been on a climb when the head guide ordered a member of our party to go down (escorted by another guide) because he was simply too slow. And if we didn’t summit and start to descend by a certain time the threat of avalanche would be heightened. When the climber vigorously protested, the guide threatened – forcefully and rightly – to turn the entire party around because he wasn’t going to subject everyone to undue risk. The climber went down.

Generally, the number two goal is to summit, and the number three goal is to have fun. This is an important distinction. Because if it comes down to a choice between summiting and suffering on the one hand (because your heart is hammering, your lungs are gasping and your fatigued legs feel like rubber), or not summiting and not suffering on the other, then be prepared to suffer. Goals are goals, and priorities are priorities. If everyone is truly committed, then suffering is simply the price you pay to achieve the goal. And when all is said and done, climbers will be thankful that the guide pushed them to achieve the summit, pain and all.

Application: Prioritize your organization’s goals. Then make sure your people know and understand that hierarchy. Create teaching scenarios of hypothetical situations that set up a potential conflict between goals (example: customer service vs. cost). Ask your people how they would respond and why.