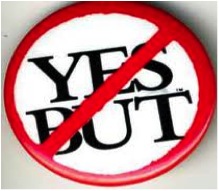 It only takes one word. But one word can carry massive weight. Saying ‘yes, but …’ sends the message that ‘you’re wrong’ or ‘I disagree.’ It places you in opposition and makes the other person an adversary.

Change the one word. From ‘but’ to ‘and.’ Saying ‘yes, and …’ sends a message of acknowledgement and respect. Instead of making an adversary you make an ally.

If a goal of communicating is to influence, which word do you think is more effective?