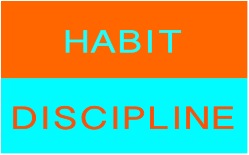 Being disciplined is a trait I admire. Many would say I’m very disciplined, but I don’t think I’m disciplined nearly enough (something, apparently, that many disciplined people say!).

So I was intrigued when a friend told me about a book she was reading, The Power of Habit by Charles Duhigg. The simplified premise, as you might guess, is that one’s power lies in the ability to cultivate positive habits.

Which got me thinking about the relationship between habit and discipline.

Discipline implies making a conscious decision and then applying one’s will to follow-through on that decision. Going to the gym. Turning down that piece of chocolate cake.

Yet when something becomes a habit, there is no decision to be made and, as a result, no will that needs to be applied. The issue of choice doesn’t enter the picture. My friend, who I consider to be very disciplined, says that running every day – something she has done for many years – is simply a habit, not a result of iron-willed discipline.

Now, we often talk about successful organizations being disciplined. Are they disciplined or is it they’ve cultivated good habits? And should we place more focus on building such habits?

Still, it’s not to say that discipline plays no role in success. After all, how do you think individuals and organizations build good habits?!