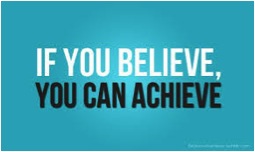 Imagine that a group of Asian-American women is given a math test. Before taking it, half are subtly reminded that they are Asian. Half, that they are women. Which half performs better?

This was an actual study carried out with college students. The result? The half who were reminded they were Asian performed above average. The half reminded that they were women, below average. Expectations associated with being either Asian or a woman led to significant dfferences in performance.

Similarly, employees will often live up or live down to what they believe you expect of them. That’s why whether you believe an employee will succeed or not, you must resolutely convey that they will succeed. Watch out, they may surprise you. And themselves.

Getting people to believe in themselves, to believe in what they are capable of, regardless of the circumstance, is a cornerstone of effective leadership.